In 1948 a group of people interested in the arts organised a festival for singing, dancing, instrument playing and speech. Local businesses, the Education Authority and the Council all supported them and the first major Festival was held the following year. Many famous entertainers sent messages of goodwill, including Sir Laurence Oliver, Dame Flora Robson and Sir Ralph Richardson.

Over the years the sections have extended and there are currently 11. Volunteer section secretaries organise their own programmes, find venues and arrange adjudicators. Entries are encouraged from all cultures, ages and abilities and competitors have the benefit of comments from professional adjudicators. The Festival is affiliated to the British and International Federation of Festivals, is a registered charity and is controlled by an Executive and general committee.

If you would like to become a volunteer helping the festival please go to the news page for further information. 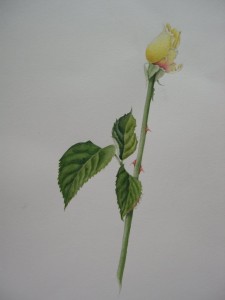 In 1994, recovering from an accident to my right scaphoid, wrist, collarbone and torn ligaments in my chest, and damaged vertebrae in my neck – which had happened almost six years previously, leaving me unable to write, draw or paint for this length of time – I was persuaded by a very dear friend to attend Flower Painting classes with her.

Still in considerable pain and having been diagnosed with Hashimotos Disease, eleven months after I began to draw and paint again, in 1995 my husband Roy encouraged me to enter for the Nuneaton Arts Festival, held at the Museum and Art Gallery in Nuneaton.

Although I was reluctant to visit the Gallery after the judging had been carried out, Roy insisted we should do so, as I was feeling quite ill at the time I really just wanted to go home, but Roy’s persistence prevailed and much to my amazement I had won a 1st in the Plants and Flowers section.

It is a feeling I will never forget, it was such a tremendous moral boost and made me determined to continue painting. On the award evening, the adjudicator said he wished to speak to me after the ceremony.

I was intrigued to know what he had to say and was more than delighted when he encouraged me to take up Botanical painting more seriously recommending that I contact the University of Birmingham where a course on Botanical Illustration with credits leading to a Certificate course was going to be held. I not only eventually qualified at Birmingham but also qualified at an adult course at the Royal Botanic Gardens at Kew and also at Leicester Southfields College, again in botanical Illustration.

Over the years I have won many awards and Trophies at the Nuneaton Arts Festival, I am eternally grateful to the organiser of the Festival, because without them and their dedication I would not have had the opportunity for such a life changing event, my Botanical Art has become my salvation many times over and I would urge anyone with any sort of health problems to immerse themselves in the wonderful world of art, and to enter the Festival of Arts, you never know it could also be a life changing experience for you too.

Please do enter this worthwhile event, in so saying I wish you all the luck in the world.